A Film with a FAT HEROINE--Ten Stories Tall screens at NYWIFT, NYC 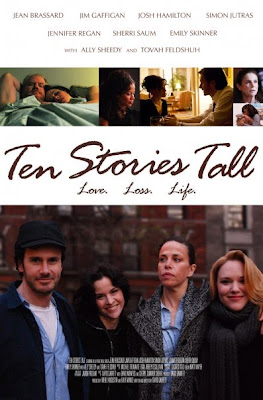 Hope you are enjoying Spring-like weather where-ever you are!

On Tuesday March 22, right here in the NYC, there will be a screening hosted by New York Women in Film and Television of Ten Stories Tall. One of the producers, Merle Augustin is a very nice lady!.. and thus-- a woman in film.


This original, independent screenplay is the debut feature from award winning film maker, size acceptance team member and supporter, and all around swell dude--David R. Garrett.

Below you can find links of your choice, a blog interview done by yours truly, and the info!

Hope you can join us........ this is a rare gem... a New York City tale that ultimately shows a lovely plus-sized woman in a positive way.


Hope to see you there!

This screening series celebrates the work of NYWIFT members. Whenever possible, the filmmakers are present for discussion and socializing after their works are shown. Screenings take place at Anthology Film Archives, 32 2nd Avenue @ 2nd Street.

There will be a Q&A following the screening, and an after-party to follow, with Cash Bar and complimentary food @ Dempsey's Pub, 61 2nd Avenue, between 3rd and 4th Streets.


When her best friend, Anna, dies, grief-stricken Grace, played by Tovah Feldshuh, confesses to their lifelong affair. Her revelation strikes at the core of the friendship between the relatives of the two women and provokes a confrontation with Anna's daughter, portrayed by Ally Sheedy. It also spurs unexpected journeys of self-discovery for every member of the family. The film also stars Josh Hamilton, Sherri Saum, Jim Gaffigan, Jennifer Regan, Emily Skinner, Jean Brassard and Simon Jutras.


Written and directed by David Garrett; produced by Merle Augustin and Kaer Vanice.

David Garrett, writer/director, made his first film, Your Children: The Testimony of Charles Manson, as an adaptation of his play of the same name. His next short, Clown Car, won several festival awards and was distributed by Warner Brothers. He’s been a semi-finalist in the Nicholl Fellowship competition and won the Ezra Litwak Award for Distinction in Screenwriting from Columbia University, where he earned an MFA in film. His short Warlord debuted at the Rotterdam Film Festival and won best short at the South by Southwest festival in 2008. Ten Stories Tall is his first feature.

Marle Augustin was born in Port-au-Prince, Haiti. She left Haiti to become a journalist for the Miami Herald, the Sun-Sentinel and the Associated Press, before moving on to filmmaking with the multi-media documentary Indivisible: Local Heroes Changing America and narrative filmmaking with an MFA in directing at Columbia University. Before Ten Stories Tall, her first feature, she produced several short films including Warlord in 2008, winner of the Grand Jury Prize at the SXSW Film Festival and 2007 official selection at the International Rotterdam Film Festival.

Sponsored by:
NYWIFT programs, screenings and events are supported, in part, by grants from the New York City Department of Cultural Affairs in partnership with the City Council, the New York Council of the Arts and
Posted by Kira Nerusskaya at 2:33 PM