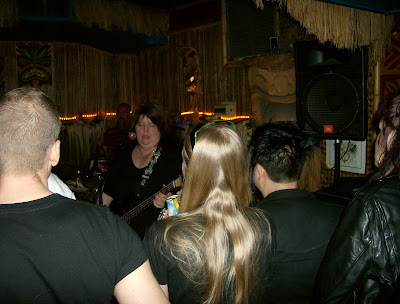 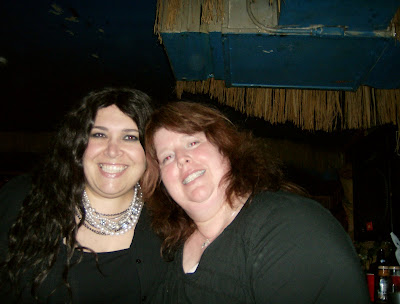 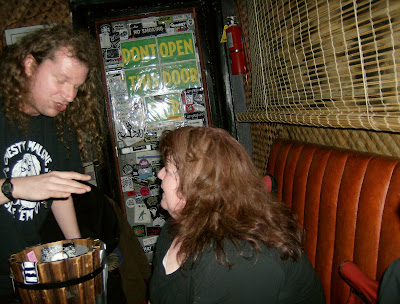 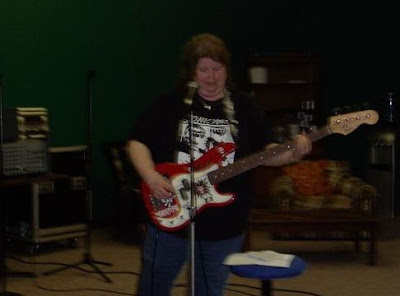 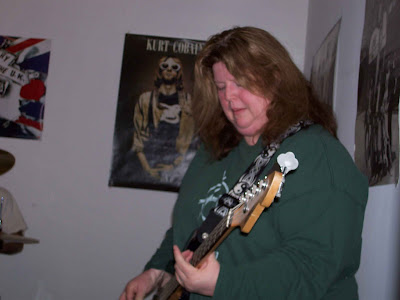 O…. sigh. Nostalgia. Again. I didn’t wear crazy black eyeliner, I had no safety pin anywhere on my clothes, there was no X on my hand, and I didn’t purposefully rip my black stockings. Those were the days, though!

Recently, I accepted an invite from from 21 year punk rock band and veteran Iconicide’s front man, Chris. You can check out his band here. or thier myspace page.

Chris was hosting a great gig at Otto’s Shrunken Head right here in my hood in NYC.

It was so nice to go and hear some very LIVE music. It brought be back to my youth, as I am definitely part punk-rocker! I spent many a night rockin’ it—in the mosh pit or on the other side of a pen interviewing some of old punk rock’s more unusual acts. I have stories!

There is something to be said about being in a room with a lot of live and positive energy—with or without earplugs!

But Chris is no stranger to Fat Girls Float, in fact he was a kind and articulate subject who answered and email and after a warm conversation and a bit of faith trekked to the East Village to let me interview him, but more on that titillating tidbit in the very near future.

C.J. Jacoby is the lead singer and front woman for Phille-based band Animal Train. Take a listen to them on MySpace.

They rocked the house. You can really understand CJ’s lyrics and hear her! Which, if memory serves, is not always a possibility with some punk bands.

I did a brief interview with CJ for this piece. She was an absolute doll. And was truly warm, gracious, open, and offered me a drink more than once. We should have done a shot, next time, girl! It’s on me!

I asked her about fronting a punk-rock band in 2010, and how she is received by the audience. I have seen all sorts of stuff thrown at people during my many years in and out of clubs like CBGBs, so……. I wondered. Her advice to other women was to accept humor (if it’s funny) about size, and don’t take it all so personally.
On getting heckeled, she responded, “If you get heckled, just “rock it! Why harbor it?” And rock it she did! Goes to show you----fat girls can rock, and rock the positiveness of not letting their weight weigh them down! Go CJ!

And the good news is that they are coming back! So, if you would like to join me at their next NYC appearance, please show your mug at Otto’s on MAY 30th at 7:30 pm.
I really thought they were great and truly felt inspired. Always saw myself play a gig at CBs (CBGBs); but… they closed and I went off on another non-punk rock path. But, someday you never know I might wear my very own (size 24) shimmery silver Renyold’s wrap-esque Kim Gordon of Sonic Youth inspired short shorts on stage in an all girl all BBW/FatGirl punk band!

Sigh. Does that mean I need to return to dating long haired musicians? I wonder what the guys from Das Damen are looking like these days? (FYI--They broke up in 1991, married, short hair.—Oh, well.) Hmmmm… thinking, thinking…..I love me some old Dinosaur Jr…… and J Mascis is still rockin’ the long hair.

If I did not have a full-time job, I would certainly add to my list of projects. Then again, I always thought that there should be an all BBW/FatGirl punk band and an all BBW/FatGirl version of the Spice Girls. No, Moulin Huge does not count.

Hmm…… if I did I would have to come up with a name for a band. I used to have them all written down on the other side of my history notebook. But, I don’t think I have that list any more. Let’s see can I think of any?

Well, let’s just say I can’t think of anything kind at the moment.
But, I am all ears if you can think of one!

Because when punk rock is in your blood, it is there forever!