FOR WOMEN WHO ARE FAT, WE SALUTE YOU! Well, ROCK AND ROLL DOES! 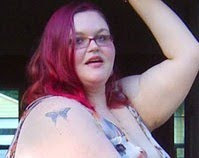 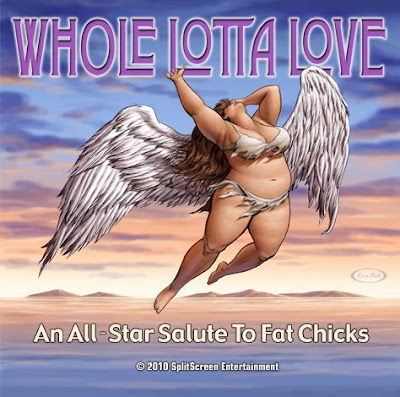 Fat Girls Rock. We the fat: the many, the proud have known this from the dawn of time. We put the roll in the rock, and I am sure with a back stage all-access pass or 2, can and have, put the rock in the roll, looked under the rock, had the rock look under us, or better yet—had the rock play with our rolls. Nonetheless, fat girls and rock and roll go to together like bacon and eggs. Mmmmm… bacon. Wait, I digress. PS. Bacon day is Sept. 4th, 2010.

But, someone else thought that fat chicks were worthy of a musical tribute. Executive producer A.J. Confessore, a lifelong lover of large ladies (and he has done the old daytime TV spots to prove it!), put the roll in his rock to show us some love. He felt that it was “High time someone mounted a musical salute, because these women deserve it!” Um, yes we do. Maybe he just has thought that more rock and roll men should mount us?! I’d agree, Mr. Bon Jovi. [If only he were single!]

Now, I know you, like me have—at least once—either done karaoke (drunk or otherwise), sang in the shower (I don’t if the neighbors are home!), or danced around your room or in front of your bathroom mirror—with the hairbrush, or with the ‘invisible’ microphone singing out to something that made you get your groove rockin’. Now, don’t make me quote Joan Cusack from Working Girl when she said,”Sometimes I sing and dance around in my living room in my underwear doesn’t make me Madonna. Never will.” Ah yeah, but it is fun and certainly makes your inner rock star come out for a mere moment. The lights, the head-bangin’ hair, the fireworks, the high heels, the roar of the crowd, the illegal downloads, the……the music.

On this 13 track disc, with cover art from artist Les Toil, you will find all your fat rockin’ faves, as well as an introduction of the lovely plus-figured Celissa Stratton belting out Led Zeppelin’s “Whole Lotta Love” as seen by the so-inspired cover art. "Since this is a salute to fat chicks, my intention was to make the song sound FAT," says vocalist Celisa Stratton. "So I changed the key and utilized my full vocal range to create a whole new version of the song. Hopefully in listening to this track, people will see the point of view of a proud fat woman who has a whole lotta love to give." Come to think of it, I do remember watching Robert Plant on Jay Leno eons ago, and him mentioning liking fuller filgured gals. oops, nope, that was Robert Palmer, RIP.

Now, folks, let's not forget that all these tribute songs are new recordings of old favorites, like, when you really had even bigger hair than you do now--like, you rememba the 80s, righhhhht? Featured songs include bee-bopping Unkinny Bop originally recorded by Poison, Split by Kiss....get out your make-up and rock. Who was your fave KISS character? Always liked Peter Chris as the CAT, and have personally met the Alien, Ace Frehley--who was a kick-in-the pants-pisser of a funny nice guy. And another featured tune is BIG BOTTOM originally featured in This is Spinal Tap! You so gotta love Michael McKeon in that while shiney lame fabric. Yes, more cushion for the pushin'. And I do recall Confessore saying that they recorded it in Dolby, and yes, the Marshall amps did go up to 11!

The project has gotten coverage from ivillage.com and jezebel.com, with specific music coverage from the likes of Blabbermouth, and, of course, Metal Sludge—for those sure-fire, all-out rockers.

So, fire up your old myspace and give it a listen.

You can purchase the album, concert tees, and plus-size t-shirts featuring the bad ass Leppelin-inspired cover art. and even a print of the cover art!

So, consider buying a disc, or getting a download, turning it up to 11, and rocking out! You can get all your info here at SplitScreen Entertainment.

Dude... I thought I heard the producer say he got some guff for calling it a salute to "fat chicks." If you read and love Lara Frater like I read and love Lara Frater, then what gives, yo? She is my very favorite--and best illustration of--a self-described 'fat chick'. Rock and roll is good enough for her, and hells bells she is certainly good enough for rock and roll, so how about showing some love back to someone who is putting time and effort to honor full figured women in music? Certainly that is worth some saluting, yea?

Well, you know the rest… we DO make the ROCKin’ world go ‘ROUND’, don’t we? You bet your lighter (or a visual image of a lighter on your iphone) we do!

Rock Out! and Rock On!

KIRA NERUSSKAYA, lover both the rock and the roll!
NEW YORK CITY
Posted by Kira Nerusskaya at 12:25 AM